Review of presentation on future of Smithwick’s Brewery site, Kilkenny

There was a semi-public presentation yesterday evening in Kilkenny Castle regarding the future of the Smithwick’s brewery site in Kilkenny city. The site is located at the heart of Kilkenny city, and a sensitive design and zoning is essential so that Kilkenny can be subtly improved without changing its character completely.

High Street, Kilkenny, with brewery site to the right and St Canice’s Cathedral to the rear on the left

The mayor Seán O hArgain started out by emphasising the new approach the Councils had taken in approaching the RIAI and asking for their help. A ‘Colloquium’ was established, with a multidisciplinary team in discussions. We were delighted to hear that the Council took a far sighted approach to the site, partially helped by the current building slowdown (or standstill, as some would say). The mayor & the RIAI President, Michelle Fagan spoke strongly about how taking the time to get this right is essential.

A common theme in all the presentations was how essential it is to do something with the Dunnes car park. The comparison with Edinburgh was made by several, and ‘the money shot’ as it was described by Seán Harrington, of the Castle being at the foot of the car park, without easy access. One thing seemed clear, there is consensus that some form of river walk is essential, from the brewery site, across the Dunnes car park to the Canal Walk. 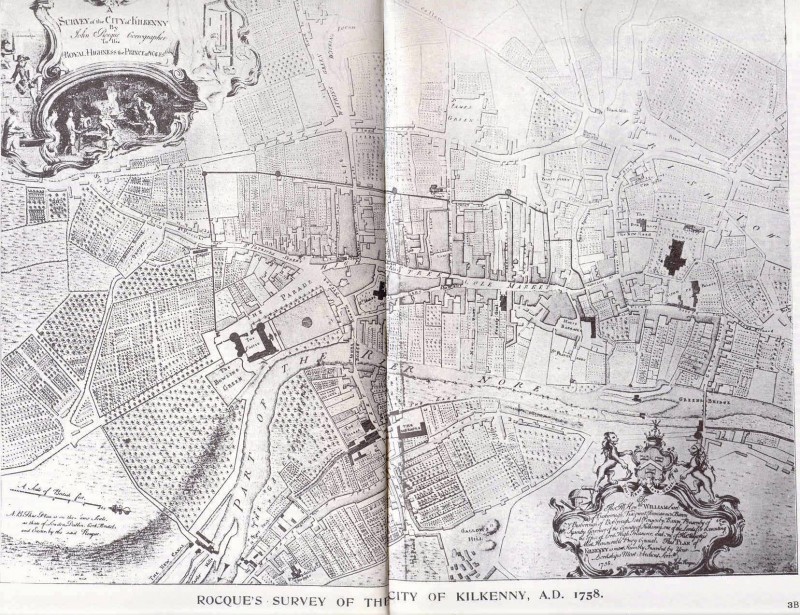 There was also consensus on the need for new bridges across the river, both pedestrian and for cars, though the locations varied.

Jim Pike of O’Mahony Pike started off with some out of date plans of Kilkenny, referring to parking spots in Kilkenny, for example, which no longer exist. It somehow felt as though he didn’t know Kilkenny very well, which was surprising, as O’Mahony  Pike are involved in the new Central Access Scheme. He talked a lot about the new bridge and how it would fit into to Kilkenny. While I strongly agree Kilkenny needs a new bridge, his presentation did not convince me; the images he showed looked like prioritising cars was the only thought. The drawings he presented were difficult to read on the projected screen, hopefully the council will make them available on their site.

Seán Harrington of Howley Harrington Architects gave a clear presentation and showed some great graphics, and had a terrific idea about turning the Town Hall into a Tourist Information Centre. Now that the Borough Council is being de-commissioned, this seems an excellent use of a public landmark. His idea of a tower in the Irishtown car park to echo St Canice’s Tower around the corner though was maybe a little indulgent. The cynic in me did smile at the thought of an architect suggesting a commission, but that is probably unfair. The site of the car park is a strategic one and certainly merits some greater consideration. His idea of a boardwalk along the river seemed a little at odds with his earlier thoughtful analysis of historic plotlines, though his vision as described in a photo montage was appealing.

Tony Reddy of Anthony Reddy Associates gave an impassioned speech on the importance of Kilkenny attracting new businesses, and described a new knowledge quarter with mixed use in the Brewery site. He talked about a grid of streets and squares, with an appropriate scale. His talk felt more about business than design.

Niall McCullough of McCullough Mulvin, though for some reason confusing everybody with maps that were ‘upside down’ compared with both convention and everyone else, suggested that the site of the abbey be excavated first. This seems like an excellent idea, especially if it could be done in tandem with the river walk. The Abbey could provide part of the focal point that Seán Harrington had pointed out was missing midway on the walk to St Canices Cathedral. 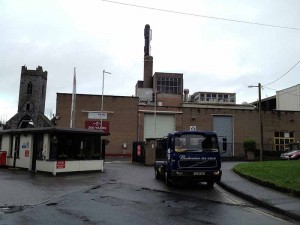 Shelley McNamara of Grafton Architects was the last to speak, which was unfortunate, as people were beginning to shuffle their feet after 2 hours of presentations. She spoke of her ‘outsider’ status, saying that unlike the other presenters, she had not worked in Kilkenny previously. She described how this allowed her look at Kilkenny with fresh eyes. She covered quite a lot in a short period of time, I only have some edited highlights. She was the first to mention the contours of the site, and how the site slopes down from High Street to the river. She emphasised that it was essential to think in three dimensions, which made a pleasant change.

She talked about a organically shaped park almost threading along by the river. This made me think of a sort of park similar in idea to the High Line park in New York, weaving along the banks of the river, expanding in places, instead of the linear boardwalk idea referred to by Seán Harrington.

She also had some thoughts on approaching the city by river, and I think she lost her audience here. Kilkenny as an inland city is unlikely to have more than dedicated kayakers arriving. Her images of a transformed Galway were lovely, if a little irrelevant.

My attention was caught again when she started discussing how to humanise the new road which will be elevated over the brewery site. She showed some examples of streets in Barcelona where traffic co-exists happily with pedestrians. I found it difficult to reconcile the images Jim Pike had shown with Shelley’s description of how it should be a new street, rather than a road and that it should feel part of the city. Maybe Grafton Architects could do some consulting work on the new road and bridge.

She had a couple of last, almost throwaway comments -one referred to a crowd funded pedestrian bridge in Rotterdam. Crowd funding has become a very popular way to fund arts projects (as Kilkenny’s own Devious Theatre knows well). In this project, your donation bought a piece, on which you could have any message engraved. I can’t see why this model shouldn’t apply to Kilkenny. There is a huge art scene here due to the good work that has been set in place over the last 50 years.

The other last item was to do with temporary occupancy of the site. A recent trend in Dublin and closer to home is for ‘pop up’ shops. Short term lets allow start ups a chance to get a visible presence with minimal initial outlay. Artists could occupy part of the site for Arts Week, musicians could have gigs in the existing buildings, carpenters could use some units as workshops. This deserved a bit more discussion than to be neglected at the tail end of a long overall presentation.

Seán O hArgain noted that the videos of each of the presentations will be available on the Council’s website on Monday. He also stressed that submissions from any member of the public are welcome.

Why building a house for Bloom’n Dedalus isn’t easyLooking to buy a house that needs work?